Let's take a look at the "starvation" period and the leadership of John Smith that ultimately saves the lives of the English settlers.

Watch the video below. While watching the video think about the living conditions the settlers might have faced. What obstacles might they have encountered when it came to generating food for the colony? What natural resources were available to them? Why would the English keep coming to the new world knowing what they know?
Below is a re-enactment video of Ann Burras - she was one of the first women who arrived at the Jamestown Settlement as well as the first woman to wed there - she married an English settler by the name of John Laydon (one of the very first settlers that was still alive). In this video, the Ann Burras describes what it was like walking into the Jamestown settlement for the first time and what life was like during the "starving time."
The "starving time" was form the winter and spring of 1609 to 1610. It is estimated that anywhere from 100 to 200 settlers perished during this time. What created this terrible time in the settlement history? The combination of low money and supplies from England, John Smith having been sent back to England from injury, the desintigration of trading with the Natives, and drought all played a part. During this period, Chief Powhatan had surrounded the Jamestown fort, making it so that no settlers could go out and hunt for food. Inside the fort, the settlers drank bad water, fell sick and went hungry. Because there was no other food, the settlers had to eat dogs, cats, horses, rats, and even poisonous snakes. There was also a severe drought that made it so the Indians had no water to grow their crops which in turn meant no food for the settlers. Due to the intense suffering during the starving time the settlers were ready to give up and return to England. It was said that they boarded the first ship to reach Jamestown, but only turned around when they crossed paths with another ship carrying their new governor and supplies. If you were a colonist who survived the "starving time" would you turn back around and try again? Discuss with your field trip partner.

What type of Food was at the Jamestown Settlement? 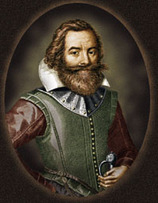 Since the English settlers knew nothing of the new land and most of their food from the voyage had either been eaten or rotten, they relied on the native Indians to provide food for them. They hoped trading with them would accomplish this.  However, this did not always work out - just remember the "starving time" mentioned above. Since the relationship with the Powhatan Indians was tricky the Jamestown settlers need a more dependable way to ensure their survival.


Captain John Smith - John Smith was the son of a farmer. When he was older he joined the English Army. He fought in numerous wars in the Netherlands, France, and Hungary. This education in survival in harsh conditions would make him a valuable asset in the New World. His distinguished service in the English Army earned him a coat or arms and the title of captain.  He devoted his life to America's "glorious possibility." He believed that a "new" England in the Americas was the future and he was eager to explore this possibility. He was one of the few settlers who went on an expedition to search for the NorthWest water passageway.


He became Jamestown's president on September 10th, 1608. Since he was the President it was his task to find more food for the settlers. He set up a trading relationship with Chief Powhatan where the English would be given bushels of corn and the Native Americans would be given grindstone, chickens, copper glass beads, muskets, and swords. Even though the trade went sour, Captain John Smith was able to bring back several hundred pounds of deer suet (fat), and 479 bushels of corn at the end of January. He ensured that the settlers would not go hungry in the winter of 1608. ﻿


He also enacted strict laws in the settlement. He thought most settlers were lazy and did want to work to make sure they survived. Now that he was president he could do something about it. He posted an account of each worker's job performance on a public bulletin board to praise those that contributed to the over success of the settlement and shame those who did not. He had a policy "He that will not work will not eat." He was tough. Under his order the colonists dug a well inside the fort, put a new roof on the church, and built a guardhouse to protect the fort. He also implemented a few Native American ways when it came to food. They made nets and weirs to cath fish; hunted for turkey in the woods, deer and other game; and they also dug up tuckahoe root to grind into flour to make bread. Because of his leadership the colonists survived the year and were beginning to be prosperous.
Watch the video below to learn more about the Jamestown Settlement economy
Sources:
Videos
History Channel - https://www.youtube.com/watch?v=ssS6UoBoiuc (American the Story of Life: Life in Jamestown
Ann Burras Video - https://www.youtube.com/watch?v=UX5m9bFt5XU (Jamestown Chronicles: Ann Burras, Colonial Maid)
Economy Video - https://www.youtube.com/watch?v=_BML_1-T1Vo (The Economics of Jamestown)